The States With No Income Tax - Yes They Do Exist!

The U.S was founded on the mantra ‘no taxation without representation!’ - the notion that as a colony of the British Empire, Americans were required to pay taxes but were not given the opportunity to elect MPs to the Houses of Parliament as the British were. It is no surprise then that the ability of individual states to set their own tax regime and the notion of states with no income tax is intrinsic to the way the American federal system works.
In reality whilst there might be some states without income tax these states claw that money back through other indirect taxes. This makes it hard to define where the best state to pay taxes in the U.S actually is. Here are three states that pay no income tax at all!

Since 1993, the constitution of Texas state specifically outlaws the ability of the government to levy income tax on its residents. This was approved by voters in a statewide referendum. In order to compensate Texas charges a high level of tax on goods, known as a sales tax. The basic rate is 6.25% but individual counties and cities can impose an extra 2% so the maximum combined rate is 8.25% on purchases.
Whilst this might sound low it soon stacks up over the course of a year. Texas also has a high rate of property tax of 1.86%. This doesn’t apply if you are yet to own your own home but if you have invested in brick and mortar companies and want to get on the property ladder, you could see a reduction to some of your earnings.

Florida is another state with no income tax, having outlawed it in 1855. The State claws its money back through taxes on property. On any property worth $166,800 the tax rate is $1,702. Sales tax is 6% and like Texas, individual counties and sub-government institutions can add an additional 2%. There are also taxes on fuel of up to 41 cents per gallon on gas and 34 cents per gallon for diesel, though these rates vary by county.

It is perhaps no surprise that the state that is home to the City of Sin does not charge its residents' income tax. As you can probably imagine there are a number of sin taxes. Cigarettes are taxed to $1.80 a pack, liquor is $3.60 a gallon and there is a 10% sales tax on cannabis. As a state that derives most of its income from services thanks to the multitude of casinos, restaurants and entertainment venues in Las Vegas, sales tax is high in Nevada. The combined total rate is 8.14%.

Are No Income Tax States Worth The Move?

Whether a no income tax state is cheaper than one that does charge income tax depends on your individual circumstances. If you spend a lot of time out of town and don’t spend that much money in states with no income tax then it could be worth it as you won’t be hit by the hefty sales tax. States that don’t charge income tax are also not that great for buying property as there is a tax on property but if you are still renting then it could work in your favor.
Whatever state you are in and whatever your tax arrangements are, at some point you might be asked to provide proof of income in the way of a pay stub. Fear not and check out our paystub generator to see how we can help you print professional pay stubs.

Jaden is one of our professional accountants, a highly experienced financial analyst, and a regular contributor to our informational blog section.

The Comparison Between Conventional Loan vs FHA Loan

Examples And How To Track KPI

How Much Do You Know About California Payroll Tax?

How Do You Negotiate Your Salary?
Quick Links 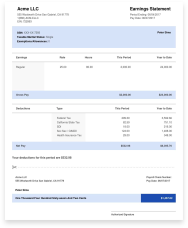